'I always have to repeat myself.'

'People speak too fast in English and I can't understand them!'

Does this sound familiar? If so, read on to understand some of the features of spoken English and how you can better use them to help you.

Languages can be broadly grouped into two main types: stress-timed and syllabic-timed. What does this mean? First, we need to understand what a syllable is. For example, the word 'syllable' has three syllables

which shows you that a syllable is the smallest unit of sound in a word with a vowel sound. Here are some more examples: 'Malaysia' has three: Ma - lay - sia, and 'country' has two: coun - try. Now we need to know what 'stress' means in pronunciation terms. It means to make something stronger (louder, clearer) when we say it. Got it? Ok! Back to our types of languages:

In these languages, syllables have similar lengths or amounts of time. Syllables may still have stress, but each one is roughly of similar length and each syllable should be pronounced clearly. Languages include Chinese, Vietnamese, Korean, Indonesian, Spanish, Brazilian Portuguese, Turkish, South Asian Languages, Italian, and French.

In stress-timed languages, like English, it's very different. Syllables all have different lengths because important (i.e. stressed) syllables are longer, and less important (i.e. unstressed) syllables are shorter. If a syllable isn't important, we don't need to hear it clearly and it's often 'reduced' (very little). In fact, if you pronounce a syllable clearly when it should be unstressed, it sounds like you're stressing it, which will then make the word very hard to understand for an English speaker. For example, photograph, photographer, and photographic all have different stressed syllables so if you say one of the unstressed syllables clearly, it might sound like you're saying a different word.

This is a picture representing the difference between the two language types: 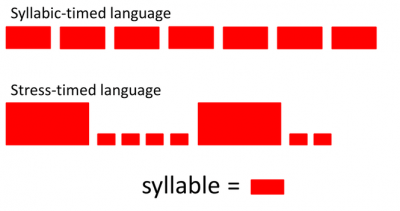 In English, there are two types of stress: sentence and word stress. When we say some words louder or stronger than others in a sentence, this is called 'sentence stress'. We can also stress words by changing the pitch of our voice, making it go higher or lower. This is called 'intonation'. Here you can see an example of word stress and intonation and how it can change the meaning of the same sentence.

We also always say one syllable the loudest inside one word, which is known as 'word stress'. Sometimes more than one syllable is stressed, but there's always one that's the strongest. This syllable must have a vowel sound (we can't stress only consonants in English). You can see word stress here:

As you can see, anything that isn't stressed has to be squashed into the space between the stressed syllables, whether there are a few syllables like in the first sentence ('to get a') or double that amount like in the second sentence ('don't you come and have a'). These groups of words will take the same amount of time. It's possible to do this because in spoken English, we often make the unstressed syllables very small, or 'reduced', allowing us to fit more in, but this doesn't happen in other languages like Chinese (Mandarin and Cantonese), Arabic, Vietnamese, Korean, Turkish, or Spanish.

This is why English speakers might not understand you when you're speaking 'clearly' by pronouncing everything correctly. Has this ever happened to you? Keep reading!

For all language learners, it's important to know about the following:

See more examples of these features below:

How can this help me?

Good question. First, we'll consider what's important to remember in general, particularly if you have a syllabic-timed language background.

Arabic's a little different, so Arabic speakers should also remember:

How can I practise?

To practise these features, you can try the pronunciation software programs at the RMIT Learning Lab.

You can also practise syllable stress (making one syllable in a word louder than the others) and individual English sounds in free phone apps like SpeakAP or ProPower, as shown below. 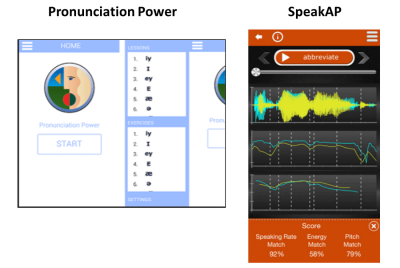 Free apps like these are helpful for practising syllable stress and individual sounds in English.

You can also practise by getting a talk with a transcript, like a talk from TED.com or a famous speech from youtube, and speaking it at the same time as the recording. You can then read it to someone like a Study Support Teacher and get feedback. Pop songs are also useful resources for practising pronunciation, because songs are easy for brain to catch on to and they exaggerate many of the spoken English features.

Use the phonemic chart

This chart can help you identify and work on individual sounds in English. It can also help you read the way a word should sound if you're not sure because this is how dictionaries will show the pronunciation. Most of the previously listed apps and software programs use it, too. You can find the chart easily by searching, or just open your e-course on Blackboard (screenshot below). 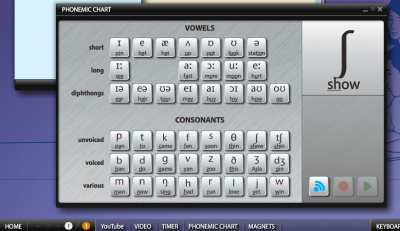 Now it's time to practise! Post below if you have any questions or feedback.

Learn more about studying with RMIT Training and RMIT University