What is really important in both spoken and written English, and is 25% of your writing mark at RMIT Training? The answer is: Organisation and Cohesion!

What does that mean?

Well, basically it means that your words and ideas 'flow' together nicely and are easy to follow. Imagine going down a nice river where there's lots of water... without water (cohesive devices), it would be terrible! But with water, it feels smooth and consistent. This is how your writing and speaking feels to someone when you have cohesion.

How can I make my words flow?

There are two main ways, and this is why we use the two words, organisation and cohesion, at REW.

We'll look at organisation in more detail another day, but today we'll stop there with it because we're focusing on the other half of what makes your writing and speaking flow: cohesion.

Cohesion literally means 'sticking together', and it's a term from the field of physics that refers to the way water molecules stick to each other. In English, it refers to the way we use 'cohesive devices' to stick our ideas and words together so they flow. Cohesive devices have different definitions, but at REW we mean special words or phrases that do this job or things that we do to connect our ideas. In other words, it's how we use words or grammar to connect everything in our writing and speaking.

In this post, we'll learn the names of some cohesive devices and rules for their usage. If you need more practice on any of them, you can do a google search of the name + 'practice', or refer to the links at the end of this article. But first, let's think about cohesion - is it the same in all cultures? The answer is... not really. Let's see why.

In English, we like everything to be connected because the way information is communicated is direct and explicit (very clear), so everything builds on what came before it. This is due to the culture, which values clear, well-organised communication where all details are explained.

In Asian, Middle Eastern, Turkish, and Latin American cultures, this isn't done as much. Sentences aren't connected as often with cohesive devices because the person receiving the message, i.e. reading or listening, makes the connections in their head. In other words, the writer or speaker is not responsible for making the message clear; the reader or listener is. In these cultures, it might be insulting or rude to explain something very clearly because it might mean that you think the other person is stupid. This means that communication is often 'implicit' (suggested rather than clearly communicated) or indirect.

However, in English-speaking cultures, it's the opposite. You need to constantly connect your words and ideas with different cohesive devices because the person writing or speaking is responsible for making the message clear, not the listener or reader. This means that if you don't connect everything very clearly, you are wasting the reader or listener's time by being unclear about your message.

What are cohesive devices?

Here are some commonly used ones called determiners, which can do the first two things from that list. All of these can go before a noun unless it's an uncountable or abstract noun. 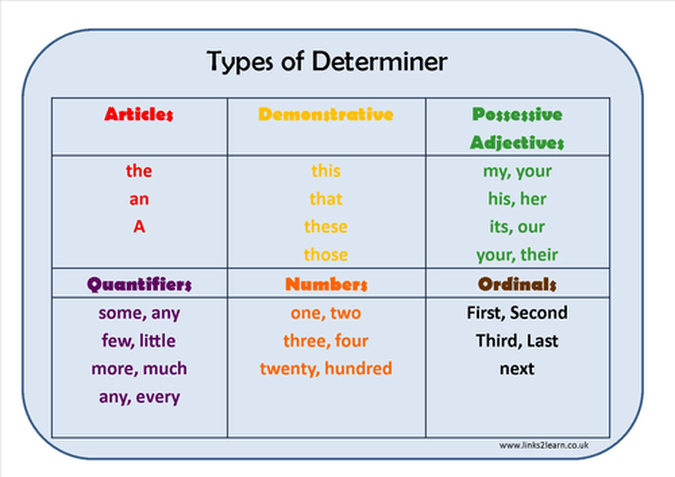 Articles tell us whether a noun is definite or indefinite. 'Definite' means we all know which noun and it's a specific one. For example, if I say 'the world', you know that I mean this world, planet earth.

'Indefinite' means the reader or listener might not know which one. For instance, if I say I'd like an apple, I'm not talking about one specific apple; I would eat any apple. As you can see, in English we make a distinction between specific and general, but in many other languages, it's different.

Demonstratives 'demonstrate' or show us which noun in terms of distance. This one means one that's close to us while that one means one that's farther away from us. These and those follow this same pattern: close to us or further away from us respectively. In writing, distance is sometimes unclear, but in speaking it's really obvious because we use non-verbal communication as well. For example, I might say Can I borrow that pen? while pointing to a pen that's quite far away, or Can I borrow this pen? while touching one that's close.

In academic English, you'll use these often to refer to things you're writing or talking about. This is useful for referring to a situation or whole sentence. For example, in the second sentence following, see how 'this' refers to the situation described in the first sentence: Companies around the world use factories and large scale production to produce huge quantities of items quickly. This has led to an increase in pollution.

Possessive adjectives tell us who owns or is responsible for the noun. For example, in this sentence, we can see that it's the governments' citizens, not just any citizens that we are talking about: Governments need to take responsibility for the safety of their citizens. Use these when you need to explain who needs to take action or responsibility for something and why.

Here are some examples of determiners with the nouns they refer to or replace in the same colour. Can you find an example of a possessive adjective and a demonstrative? There are also examples of personal pronouns, which we'll look at next.

Examples of determiners and pronouns (coloured)

These tell us how we can quantify or measure the amount of a noun. There are different quantifiers for countable and non-countable nouns, and some quantifiers can be used with both types of noun. Here's a list of some of the most commonly used ones. Are you using these in your writing and speaking? 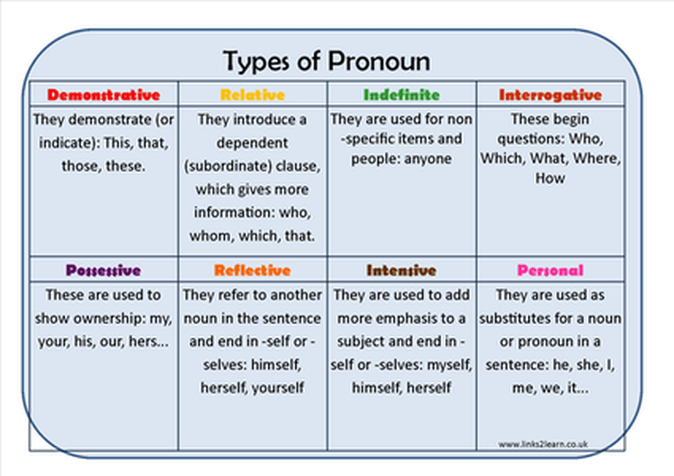 ﻿Relative pronouns are used to make 'relative clauses', clauses that refer to or give more information about nouns. For example, in the sentence The question which governments need to consider is who will pay for homeless care?  Which is taking the place of 'the question'.

Indefinite pronouns are like our indefinite articles, 'a' or 'an'. We call them indefinite because they can refer to any noun in a certain group. In other words, they don't tell us which specific noun they replace. For instance, Is anybody coming to my house tonight? asks whether any person (not a specific person) is coming to the house. Others include:

Use indefinite pronouns in general statements, topic sentences, or facts, for instance:

Interrogative pronouns are used to make questions, and more commonly in academic English, noun clauses. What are noun clauses? They're dependent clauses (subject + verb) with a question word in front acting as nouns, and they're super useful in both academic and everyday English. You probably know them from polite question forms, e.g. Do you know where the toilet is? or Can you please tell me where Study Support is? To make them, it's pretty simple. Just take a question form and swap the subject with the auxiliary verb. Below in the table are these examples with colours to help you.

Once you've made your noun clause, put it in a noun position (usually a subject, object, complement, or after a preposition) like in these examples:

That leaves us with Possessive, Reflective, Intensive, and Personal pronouns, which are clear in the pronoun table. You'll use these in spoken or informal English, but not really in academic English except for it, which you'll use all the time in both!

Which determiners should you be using?

In academic English at REW, use the less personal ones often and avoid personal pronouns like 'we' or 'my'. At uni, this might change depending on your lecturer or course, so ask if you're not sure. In spoken or informal English, you should use all of the determiners we've covered!

How else can I create cohesion?

You can use synonyms or similar words to create cohesion as well. In both written and formal English (like an oral presentation or email to someone with authority), repetition is not used except very occasionally for dramatic effect or to get attention. This means you need to use a range of vocabulary. In other words, you need to change your words all the time.

Use synonyms or similar words

When you do this, you also create a nice flow, because the words all follow the same theme or idea. This is called 'lexical cohesion' because we create connections by using words from the same subject area. Let's look at an example. Read this paragraph and think about how many words are used for 'people':

The citizens of Victoria were very happy where they lived. They loved the weather and nature around them and the cities and towns. The people wanted to show the whole country how happy they were, so inhabitants got together and organised some photos.

Did you get them all? Here are the different words used to mean 'people':

Think about this when you write or speak in formal situations because it's a great way to produce better writing and formal speaking. And for students, this means higher marks! In informal spoken English when you're outside of the academic world, you can use your voice and body language to do this rather than change words around.

That's enough for now as it's a huge topic! Next time, we'll look at conjunctions and linking words. Please leave your comments and questions below.

To improve your cohesion, software programs like Tense Buster, grammar books and apps, RMIT Learning Lab information, or the Study Support Teachers can be useful.