What is a Critical Response?

Why is it useful?

What does my summary need?

A summary can be written in different ways, but ultimately it should:

What does my discussion section need?

In each discussion paragraph, you should:

Let's look at some strategies for writing both of these sections.

How do I summarise?

There are many ways to approach this process, but here’s one of the most effective ways:

1. Find the main ideas in your article/s.How do you do this? Look for the following:

The easiest way to do this is by annotating. This means changing the words of the original (and may also include changing word forms and word order of words from the article) and then writing your paraphrases in note form beside the text. Why is this the easiest way? Because then you can copy directly from your notes without worrying about plagiarism.

3. Organise your ideas then start writing.

Do a quick plan from your notes to make sure you:

Here's an example of a plan:

Not so clever country?

Now you're ready to write! Remember to first put your heading: Summary.

Your first sentence should include:

Then, connect all of the main points together using:

Not so clever country?

Summary
In the article 'Not so clever country?', Marion Jacobs (2010) argues that cuts to funding for universities have a negative impact. She believes that universities should be supported because of the economic and societal benefits they provide. The economic advantages she explains include more taxes from graduates and extra jobs and income for local communities. Lastly, Jacobs claims that benefits for society include not only graduates' ability to think critically and their specialist skills, but also that they are less of a burden on the health care system and are less likely to commit crimes.
(95 words)

What if I need to talk about two articles?

Then you can either summarise them separately or together – use the one you prefer or the most suitable according to the number of main points in the articles. If you put the summaries together, you will have contrasting language between the different articles’ main ideas e.g. while / whereas / but / however. If you do two separate summaries, you will only need one contrast linking word in the first sentence of second article’s summary.

You can see all these concepts highlighted below in the example of two summaries:

In the articles ‘How much English is enough’ (2011) by Jane Cuthbert and ‘Globish? It just doesn’t make sense’ (2014) by Peter Jackson, Globish, a simplified version of English, is discussed. While Cuthbert argues that Globish is a useful development in English language teaching, Jackson thinks that it is idealistic and will not work in reality. He believes that the lack of grammar in Globish can cause misunderstandings, whereas Cuthbert states that Globish does not focus on accuracy and is therefore easier to teach or study independently. In addition, she claims that being independent of culture and limited in vocabulary size are benefits of Globish; however, Jackson feels that it is impossible for language to be separated from culture, as well as the fact that Globish’s limited vocabulary may not be enough for business or deeper levels of communication.

In the article ‘How much English is enough?’, Jane Cuthbert (2011) discusses the advantages of Globish, while in the article ‘Globish – it just doesn’t make sense” (2014), Peter Jackson considers its limitations.  Cuthbert (2011) argues that the reduction in vocabulary size and grammar promotes confidence and that 1500 words is sufficient for communicative purposes. In addition, she believes that there is no culture in Globish, which makes it more accessible for students. Finally, the author states that Globish is not only easier to teach than English, but also more useful in terms of developing learner independence.

However, Jackson (2014) argues against Globish. He believes that its simplicity does not mean it is easier to use, because it could lead to communication problems and is not suitable for certain contexts. The writer also argues that the vocabulary range is too small and that culture cannot be separated from language.

What do the colours highlight?

It’s important that these are all varied. Why? Because this shows that you can:

What about the discussion section?

I’m glad you asked! This is where you put your own ideas in response to the author’s ideas. Depending on your task requirements, you may need two, three, or even four discussion paragraphs in this section. Each one will show your response and support for your response to an idea from the original article.

It’s any extra information that makes your ideas more clear. For example, you might use a reason or two, an example or two, a fact or statistic, or an explanation of a situation to make your response more credible (logical and believable). In reality, you’ll probably mix a few of these together. In the end, what matters is that someone should be able to read what you’ve written and then clearly understand why you’re supporting or criticising what the author has said.

Actually, you can. In fact, you should! The entire academic world in our context is based on shared knowledge, so we all have a responsibility to think carefully about anything we’re told, compare it with what we know, find out more about it, and develop an informed perspective on it that we can support with logical reasoning and evidence. If you don’t do this, you are not meeting the expectations of the academic community.

How can I write a discussion paragraph?

There are many ways, but here’s a good way to try.

1. Choose an idea from the original article.
​
2. Think about it. What do you know about it? Do you agree or disagree? Partially agree? Why? This is your response and it needs to be very clear throughout the paragraph.

3. Plan the explanation of your response by thinking of ways to support it. To do this, imagine someone doesn’t believe you and keeps asking you ‘Why do you think that?’  or ‘Why does that matter?’. That way you will explain your response and support it with enough detail. Try to think of one or more of the following:

There’s one more step that we haven’t looked at yet... Can you guess what it is?

5. Edit what you’ve written! This means re-reading your writing, looking for mistakes and checking that what you said makes sense. This is vital for two main reasons:

What mistakes should you look for? Check: 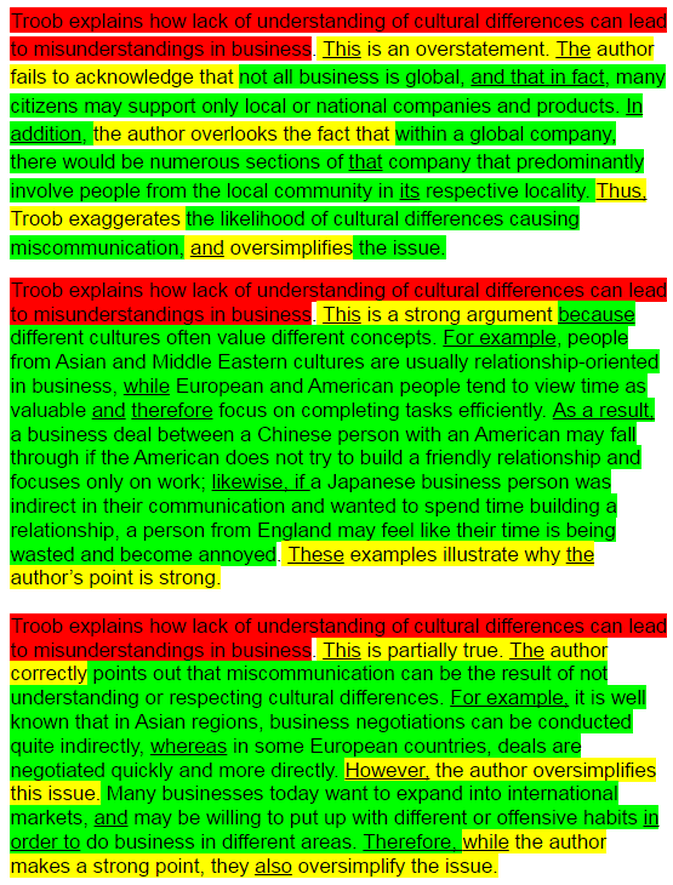 Here are some questions to help check if you understand the paragraph structure:

See if you were right:

When you write your discussion paragraph, you might use language like this to make your response clear. Which ones are used in the example above? 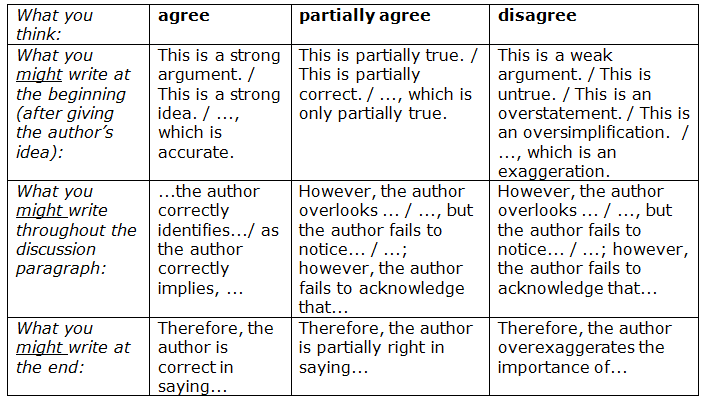 Why is there no conclusion in these critical responses? It's because they're not a necessary requirement of a critical response task at RMIT Training, although it's ok if you want to write a conclusion once you're sure you have a clear summary and discussion section. In other places around the world, you may always need to do a conclusion. This is why we need to check every time what the task requirements are!

Because it's so important to check your own writing, try these ideas if you're not confident about editing:

After you've tried these steps, show someone your writing and get their feedback. With a summary, someone must be able to understand the main ideas without seeing the original text, and showing another person is a good way to check this. If they ask questions about what you wrote, you might need to re-write it more clearly.

It also helps if you read other people’s writing. Everyone has their own personal writing style, and being exposed to these is helpful for you in terms of developing your style.

What are you waiting for? Get started writing the best critical response you've ever written.

The Pathway to Victoria Scholarship has been made possible by funding from the Victorian Government through Study Melbourne.