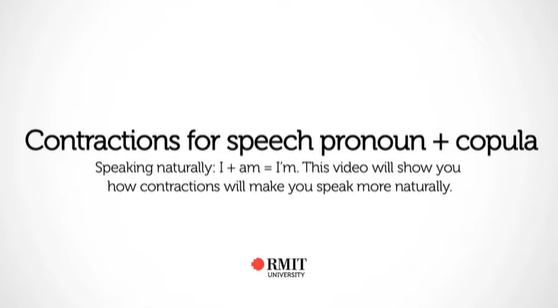 Lynda Beagle, the former Deputy Director of RMIT English Worldwide explains in this video how contractions will help you speak more naturally.

Lynda Beagle, the former Deputy Director of RMIT English Worldwide explains in this video how contractions will help you speak more naturally.

Transcript
Back to video

Hi. This tip is one of a series on contractions.

Using contractions will help you speak more naturally in English. In everyday speech, people usually contract or shorten some auxiliary verbs and join them to the noun or pronoun. For example, people don't say, "I am happy today." They say, "I'm happy today." You need to know how to do this so your speech sounds natural too.

The key is this symbol here, called an apostrophe. We use the apostrophe to show that we have removed a sound in order to join a verb to a noun. Let's just look at the verb, to be, and some nouns and pronouns for this tip. You can see we've removed the sound "a" from am, and joined the verb to the pronoun, I. We can do it with other pronouns. You're, he's, she's, it's, we're, they're.

We can also join this verb to nouns. For example, Jenny is nice, becomes Jenny's nice. Melbourne is interesting, becomes Melbourne's interesting. The cat is white, becomes the cat's white. One thing you may have noticed is that if the noun or pronoun ends in a vowel, the "s" contraction becomes a "z" sound. In fact, it's only when the noun or pronoun ends in "p", "t", "c" or "f" sound that we pronounce the "s" as "z".

This is why we say Jenny's nice, but the cat's white. Let's try one more and see if you get it right. Let's try and shorten it and try and say the sentence with the contraction. Now for the answer. She's a very intelligent student. Well done. Extra points if you got the "z" sound in she's. I'm Lynda Beagle, deputy director of RMIT English Worldwide.